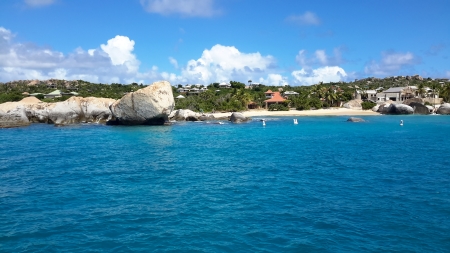 The first European sighting of the Virgin Islands was by Christopher Columbus in 1493 on his second voyage to the Americas. Columbus gave them the name Santa Ursula y las Once Mil Vírgenes (Saint Ursula and her 11,000 Virgins), shortened to Las Vírgenes (The Virgins), after the legend of Saint Ursula. He is also reported to have personally named Virgin Gorda (the Fat Virgin), which he thought to be the largest island in the group.(wikipedia)

The Arawak inhabited the islands until the 15th century, when they were displaced by the more aggressive Caribs, a tribe from the Lesser Antilles islands. The Caribbean Sea is named for these people.


The island's economy was influx until the 1960s, when air travel and off-shore banking breathed new life into the largest of the British Virgin Islands.

The North Sound's calm waters made for an ideal anchorage for mega yachts. Seafaring celebrity visitors, including John Wayne and Brigitte Bardot, checked in at the Bitter End Yacht Club back in the 60s, not too long after Laurance Rockefeller founded Little Dix Bay resort in 1964.

Little Dix Bay began as one of Rockefeller's RockResorts, a forward-thinking brand dedicated to environmental preservation. Rockefeller's aim was to create a place where guests could relax and enjoy themselves in nature, with utmost respect for the local flora and fauna. Noted for his works in conservation, Rockefeller installed a desalination plant to provide the resort with fresh water.

Even after Rosewood took over the property in 1993, the hotel group remains committed to keeping things as green as possible. Little Dix Bay was heavily damaged by the 2017 hurricane season and is currently in the process of rebuilding. They're hoping to reopen in late 2019.

One of Virgin Gorda's most striking attractions, The Baths, was granted the official title of a BVI National Park in 1990. This collection of huge volcanic boulders semi submerged in crystal clear waters has been one of the island's most popular snorkeling and exploring destinations for nearly three decades.